I've only worked in advertising a few times - animated a few logos and composed a few "jingles". Without a story I have a hard time seeing the role of the music in a TV spot - what is it supposed to mean?

In this case, I was told that the CEO of New York Life had liked the score to Fargo and wanted something in that vein for his firm's new campaign, so I went with that instruction and used similar instrumentation. Still I admit it left me confused - why should a Scandinvian / Celtic melody and a film noir arrangement be appropriate for an insurance company?

Seven years later they were still making new spots that used the music. 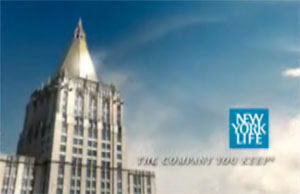 Produced by the Berlin Cameron agency

Here's an example of the music for New York Life:

This is a video clip of one of the original spots from 2000 (from VHS).

This is a clip of a recent spot using the theme.