During the heyday of MGM Studios, from the 1930s into the 1950s, Eddie Mannix was the studio's general manager. And by all accounts he and Howard Strickling, the studio publicist, were also the studio's "fixers", dealing with the stars' misadventures with drugs and alcohol, pregnancies and car wrecks. While Louis B. Mayer ostensibly ran the studio, Mannix functioned as an inside man for the New York-based owner Nick Schenk. He read every telegram in or out of the studio and prided himself on knowing everything that mattered about every star and every production.

Some say he was "mobbed up" in his home state of New Jersey. He was certainly a tough guy, but he protected the stars and was loved by some (Jimmy Stewart was a pall bearer at his funeral). And he was Catholic. 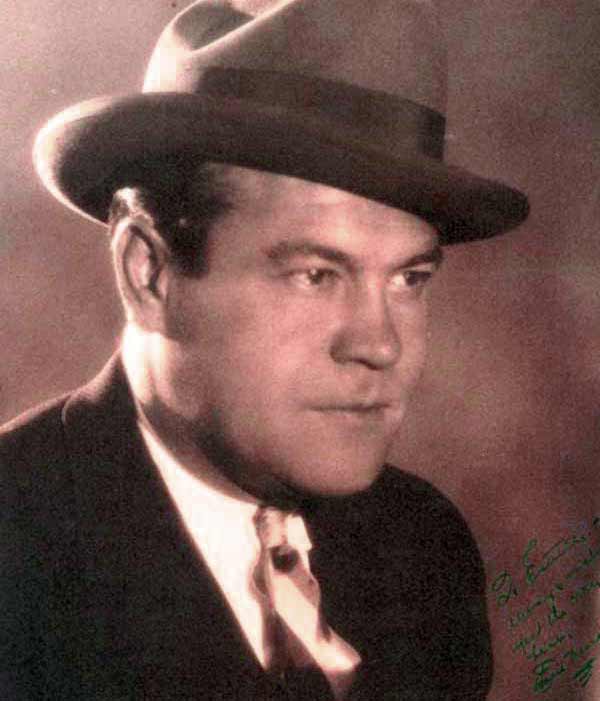 The Eddie Mannix played by Josh Brolin in Hail Caesar! is a ficitonalized version of the historical one. His studio is Capitol Pictures (the same studio featured in Barton Fink) and he has a warm family life with two kids (the real Mannix was childless and interpreted his marriage vows loosely). But the real and fictional Eddie have two things in common: they are fixers and Catholics. The Coens have merged these qualities to create a Christ-like version of Mannix, suffering for his faith and protecting that faith for the American people. That faith is Hollywood. 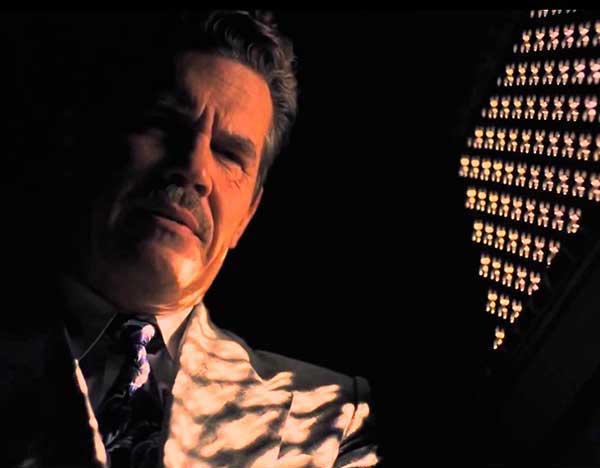 Hail Caesar! takes place during one long day on the studio backlot. We follow Eddie Mannix from soundstage to soundstage, from cutting room to screening room, struggling with one problem after another. In so doing, we move in and out of various films in progress. In the days of silent film, music was played on set, but this movie takes place in the era of sound films, when microphones were recording the actors, and the sets were kept as quiet as possible. So how do we explain the presence of music in the scenes shot on set?

Early on, Joel and Ethan and I made some effort to present music "diegetically" in these films-within-the-film. In other words, we tried to provide an explanation for why there would be music playing even as a film was being shot. Perhaps you see a band on camera, or an editor throws some temp music on a moviola.

Ultimately we abandoned the idea of being strict about this. We repeatedly used the trick of cutting into the scene already in progress so that the audience thinks they're experiencing a scored film rather than the filming of a film, and then at the end of the scene someone yells "Cut!" and we realize we're on a set. 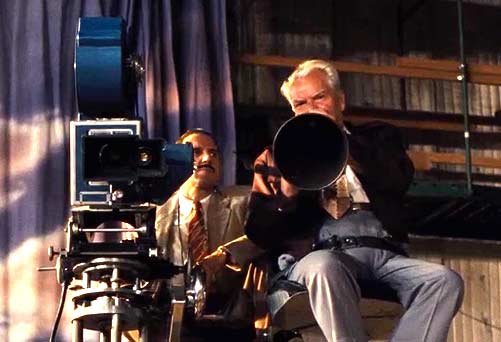 The director of Hail Caesar!

The scores of these films-within-the-film had to be authentic to their various genres - Roman Epic (a la Ben-Hur), Corny Western (Hopalong Cassidy), Water Ballet (Esther Williams) or Song and Dance (Gene Kelly). All these bits of film are subsumed by a Hollywood kidnapping mystery. And that mystery is itself subsumed by Eddie's crisis of faith. The greatest challenge for me was how to weave all these parts into a whole.

I used bits of melody to connect very different pieces of music. For instance the melody notes in the cue "5 am," an example of Eddie Mannix's "Lonely Man" theme, are also used in the trumpet fanfare of the cue "Hail Ceasar!", which is a Roman swords-and-sandals epic. The the cheezy Western "Hobie and Whitey" shares melodic elements with the film noir mystery cue "In Pursuit of The Future." I don't think the audience would or should be conscious of these musical connections but I hope they create some cohesion between all the different sub-plots and sub-films within Hail Caesar! 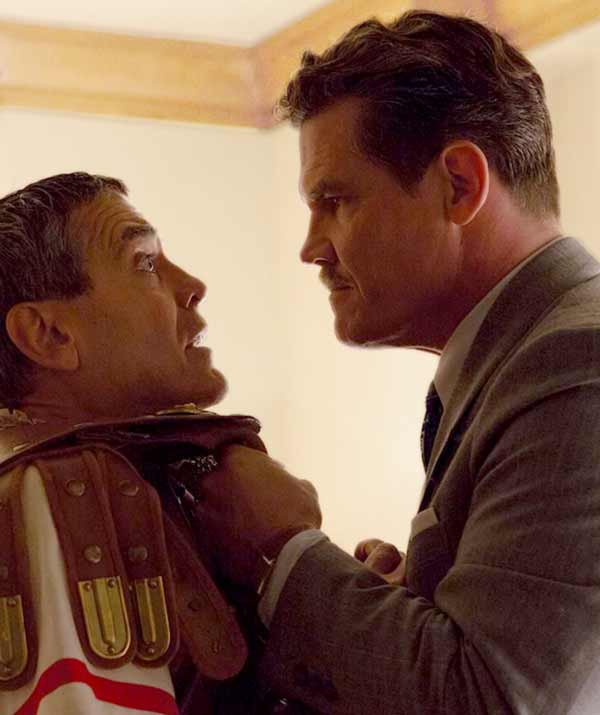 Produced, Written and Directed by Joel and Ethan Coen 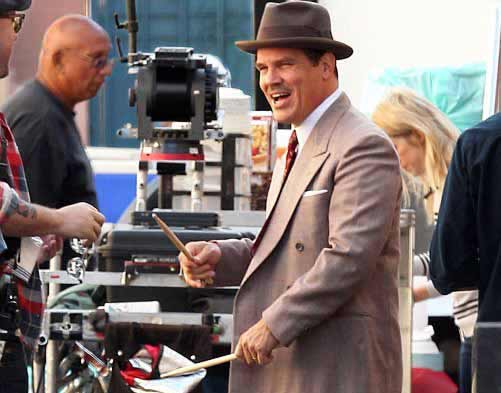 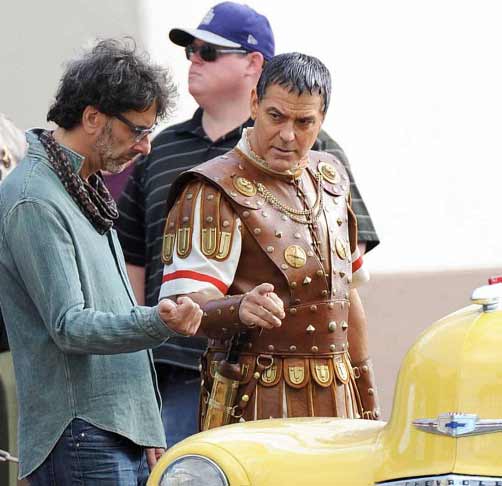 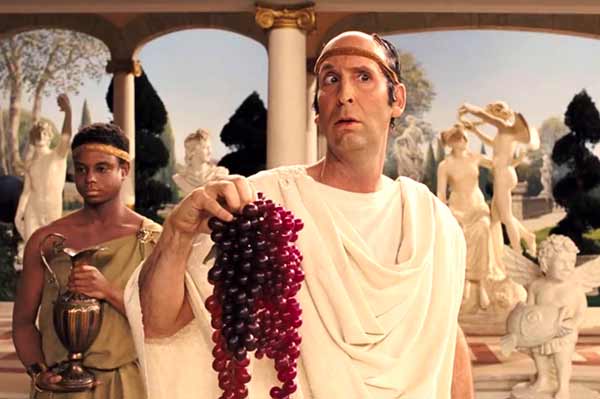 The soundtrack is available from Amazon and iTunes. For demo purposes here are some excerpts: 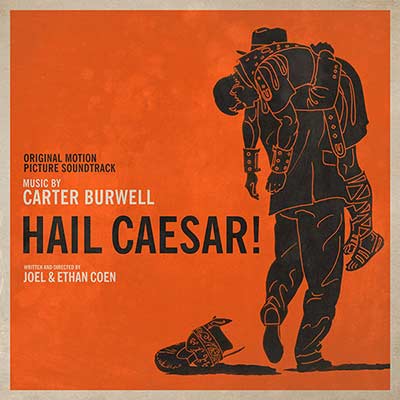 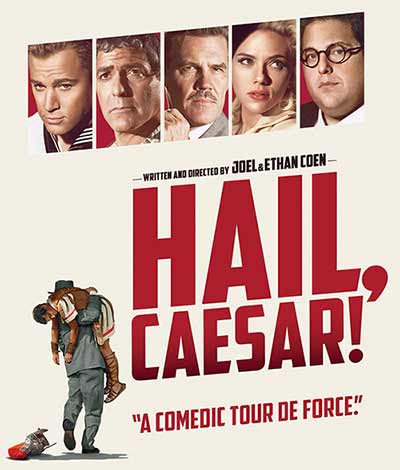 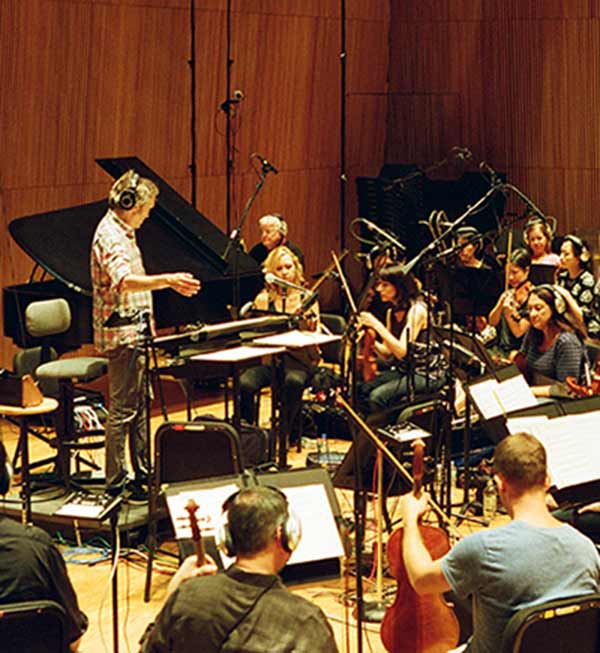 The music for Hail Caesar! was recorded in several phases.

First was the song "No Dames", written by Henry Krieger, sung by Channing Tatum, choreographed by Christopher Gatelli. This scene was planned the same way tap numbers were done in the 40's and 50's. Channing learned the song and the choreography. A piano and vocal recording of the song was played back on set, along with a recording of the tap sounds to guide his dancing. Then the real arrangement, by Sam Davis, was recorded at Avatar Studios in New York, to match the edit of the scene.

We planned to record the score in New York but some scenes that were dependent on visual effects - the water ballet for instance - weren't finished in time and we weren't sure how the effects would change the timings, so we added a recording session in Los Angeles, during the final mix of the film.

The New York recording took place at the DiMenna Center. This is the rehearsal space of the Orchestra of St. Luke's and is not a recording studio per se. The acoustics of the room itself are very good, but it's not large enough to accommodate the orchestra we needed for the cues with lots of brass, like "Hail Caesar!", not to mention the choir, so we recorded the elements in separate passes.

The choir at DiMenna
(Photo by Dean Parker)

To score the appearance of a Soviet submarine we used period recordings by the Red Army Chorus, but an extended scene that culminates in one character leaping balletically to the sub required score to match the action. I wrote my own Russian march using lyrics from "Varshavianka", originally a Polish song but later adopted by the Soviets - and Paul Robeson. To record my march, "Soviet Man," with a Red Army feel, we added basses to our choir and a Russian in the group, Mischa Frusztajer, helped with the pronunciation. 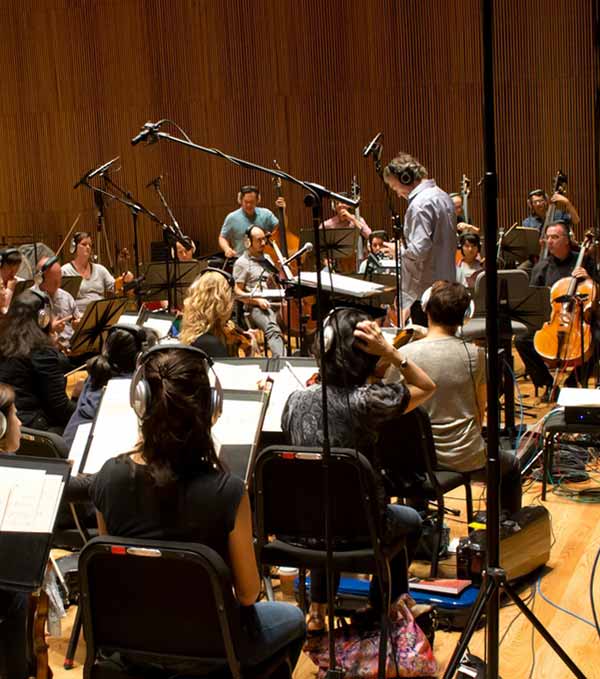 Scarlett Johansson plays DeeAnna Moran, an "aquatic artist" like Esther Williams. She performs a water ballet titled "Jonah's Daughter" which we scored with an arrangement of Jacques Offenbach's barcarolle "Belle nuit, o nuit d'amour" from "Tales of Hoffmann." This involved two wonderful opera singers, Jamie Chamberlin and Kasondra Kazanjian, that we recorded with orchestra at the Sony Streisand Scoring Stage in Los Angeles - the same stage that belonged to MGM back in the days ofl Eddie Mannix. 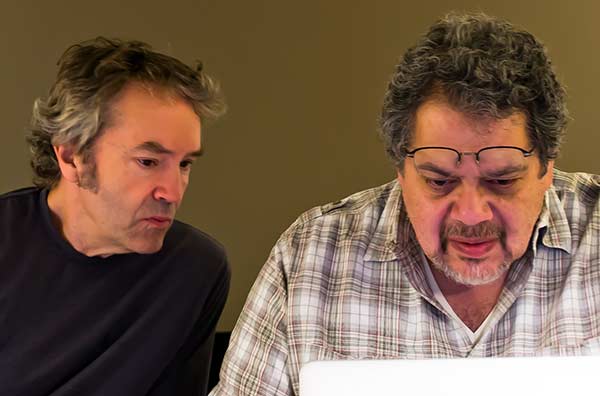 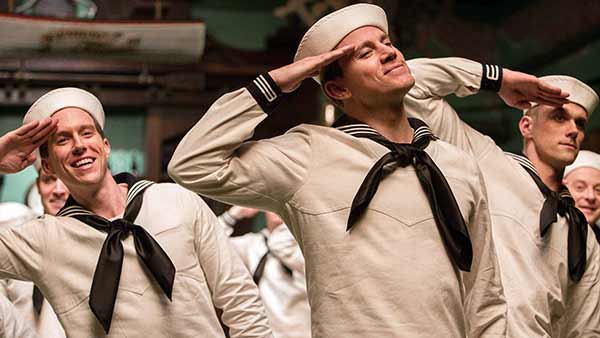 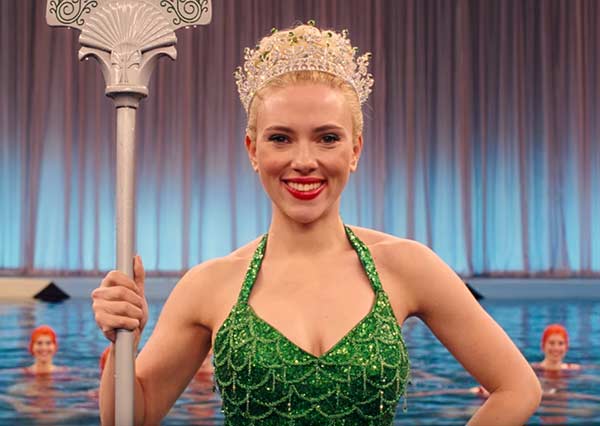 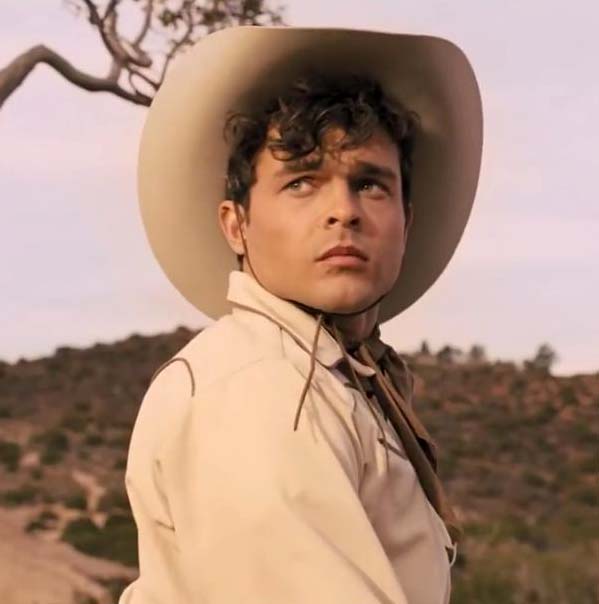 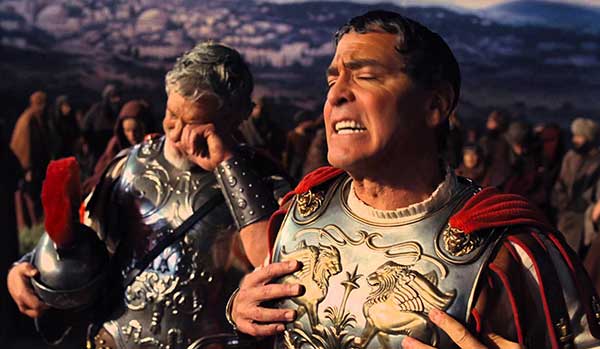 "What the Coens are about is enjoying a long, luxurious soak in the pleasures of craft, both as they were perfected in the inhuman factories of the studio system and as they are practiced today in the hands of cinematographers (Roger Deakins), production designers (Jess Gonchor), soundtrack composers (Carter Burwell), costume designers (Mary Zophres), and on and on, everyone humming along at the top of their games." - Ty Burr, Boston Globe, Feb. 5, 2016.

"The Coens, along with their frequent collaborators Jess Gonchor, Roger Deakins, and Carter Burwell, have a great time recreating a very specific era of Hollywood, and it's artificial from the first frame to the last, which is part of what makes it so very beautiful." - Drew McWeeny, HitFix, Feb. 3, 2016.

"There’s cowboy Doyle’s latest picture, a twee Western named Lazy Ol’ Moon, complete with a cantankerous prospector-type. And there’s Hail, Caesar! itself, which glows convincingly with all the grandeur and pomposity of a true, old-school Hollywood epic. In each case, the Coens’ A-crew (including Mary Zophres on costumes, Roger Deakins as DP and Carter Burwell scoring) nail the genre perfectly. It’s an astonishing technical achievement." - Dan Jolin, EmpireOnline, Feb. 4, 2016.

"... a rapturous love letter: a loopy, affectionately jaundiced portrait of Hollywood’s Golden Age at precisely the moment that it was beginning to tarnish. Written and directed by Joel and Ethan Coen, this screwball whodunit (or, perhaps more accurately, whosinit) pays homage not only to the stars who populated showbiz’s most glamorous firmament but also to the Coens’ own canon, from 'Barton Fink' and 'O Brother, Where Art Thou?' to 'A Serious Man' and even 'Fargo.' (Listen for the familiar syncopated timpani in Carter Burwell’s score.)" - Ann Hornaday, Washington Post, Feb. 3, 2016. 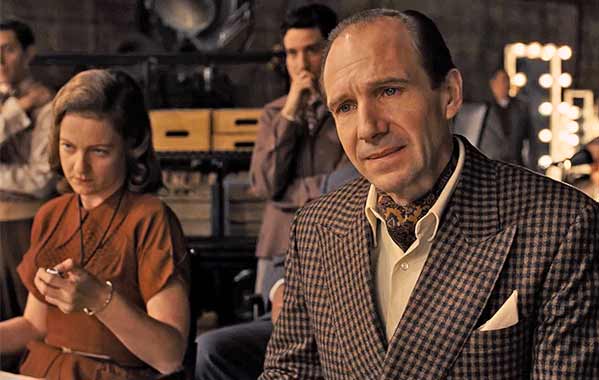 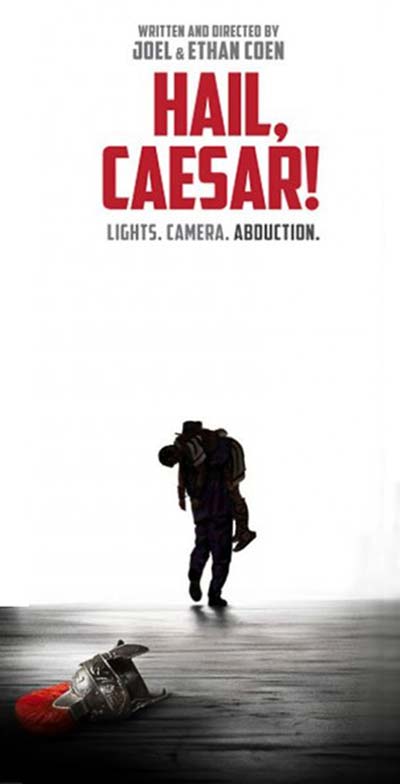