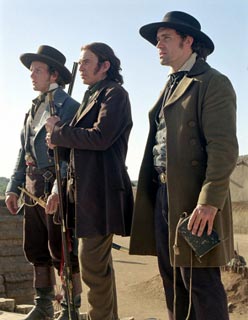 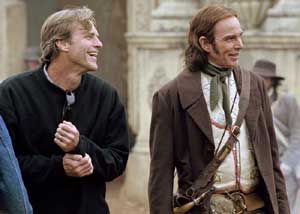 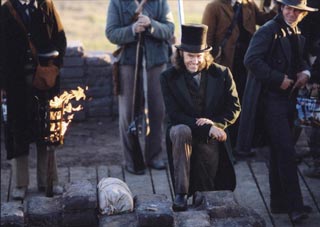 "The Dandy" on the battlements 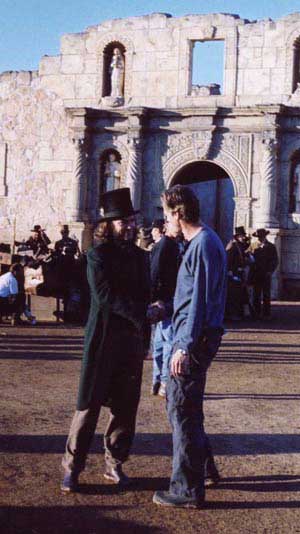 Working with Carter Burwell on “The Rookie” was so gratifying that, before I agreed to rewrite and direct “The Alamo”, I called him to check availability and discuss musical possibilities. We both felt, given the genealogy of many of the men involved in the story of the Alamo, that a Celtic feel would not only be historically appropriate but would also allow the score to take on the tone of a lamentation.

The film required on-screen music (from Mexican military bands to Tejano weddings to formal quartets to fandangos) that needed to be researched or written and pre-recorded. Thus, unlike your typical movie where the film is shot, edited and handed over to a composer, Carter’s involvement started long before we exposed film.

Adding to these difficulties was a predicament I created in conceiving and writing a particular scene for the movie. “Deguello”, which loosely translates as “slit throat”, was played by Santa Anna’s band as a reminder to the Alamo defenders that no quarter would be given - that they would all die. Each time it is played a cannon barrage follows, foreshadowing the horror to come. So far so good, but I wanted David Crockett, who played his fiddle previously in the movie, to hear beyond the strident military piece and find an inherent beauty in the music - a beauty only evident to the viewer when Crockett climbs to the roof of the main gate and accompanies the Mexican band with a layer of fiddle harmony. Oh, and another thing: the result had to be so glorious to listen to that it brings the siege to a halt, literally silencing the cannon(s) and becoming an awe-inspiring moment for both the Defenders as well as the Mexican soldados.

I was painting Carter into a corner, musically speaking, asking him to take an existing, historical 45 seconds of music and write an accompanying fiddle harmony that would turn a sow’s ear into a silk purse.

Needless to say, I was nervous when Carter sent a demo of what he’d written. We were slated to shoot the scene in less than two weeks. If the music didn’t work I’d be asking him to scrap the accompaniment and write and record a brand new fiddle piece for Crockett. I stuck the CD into the player, listened first to Deguello alone and then to the fiddle version - “Deguello de Crockett.”

And cried. Not out of relief that I’d be able to shoot the scene as scheduled, not because the idea I’d put on paper would work, but because Carter had reduced every emotion in the film, everything we’d been trying to say, into a lamentation that was beautiful, bittersweet and incredibly moving.

These are synth sketches of themes for The Alamo, most of which made it into the final score in some form. This gives an idea of how themes change as they are developed for the film.

Here are excerpts from the finished score, which is available from Amazon and iTunes. 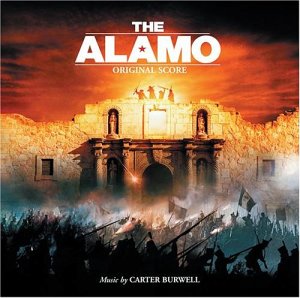 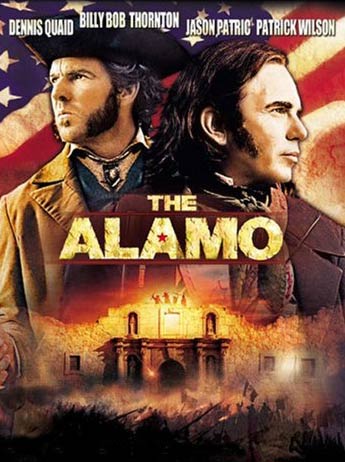 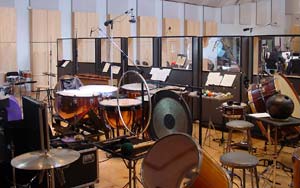 Quite a bit of music was recorded before and during the production of the film in Austin, Texas. This material, known as source music because it issues from some source on screen, was recorded by Joseph Magee at Pederales Studios (Willie Nelson's place). It included traditional dances and bugle calls, much of which was prepared by Booker White. It also included David Crockett's fiddle solos which were played by Craig Eastman, who then trained Billy Bob Thornton.

The score was orchestrated by Sonny Kompanek and Carter Burwell, and conducted by Carter Burwell. The contractor was Sandy Park, the copyist was Tony Finno, the music editor was Adam Smalley, and Dean Parker was Carter's assistant.

The list of musicians involved in the score is very large, but featured Sharon Yamada as concertmaster, David Weiss on ethnic winds, and Laura Seaton on fiddle.

"It's too early to declare Carter Burwell's score to The Alamo the best of the year, but I can safely say it's Burwell's best ever, and that includes the superlative work he has done on Fargo, Rob Roy, and Gods and Monsters... There's so much good writing on this album, you'll be faced with the terrible choice of either immediately re-listening to an incredible cue or simply moving on to the next, which might be even better!" - Cary Wong, Film Music Monthly, June 2004. 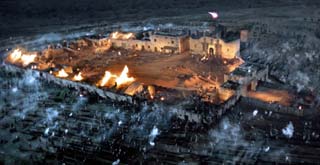 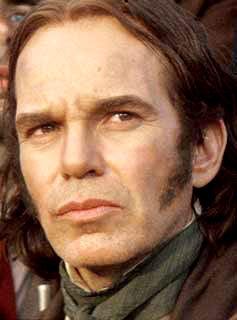