Although I've worked with independent filmmakers throughout my career, it was very different working with Julian Schnabel, better known as a painter than a filmmaker at the time I worked with him.

He'd previously directed one feature film, Basquiat, about his friend and fellow painter Jean-Michel Basquiat, and had been wounded in some way by the interference of Miramax, who financed the film. He decided he would self-finance Before Night Falls. For Julian, that meant he had to keep selling paintings while making the film. The editing room was set up in his studio, and he would occasionally say "Give me a moment, I have to meet with a collector" and go out to the studio to show his work to a potential customer. The way I remember it, he would go to a painting that seemed complete (to my eyes), and add a dab of paint so the collector would feel he'd been there for this decisive moment.

Coming from a different creative discipline, Julian had a different approach to the process of composition. Just as painter put their picture upside to judge the composition, he'd ask me to play the music backwards, or to somehow "turn it upside down". This wasn't always possble, but I could see that he wanted to be sure I wasn't coming at his project with any predetermined process, and I tried to honor that. 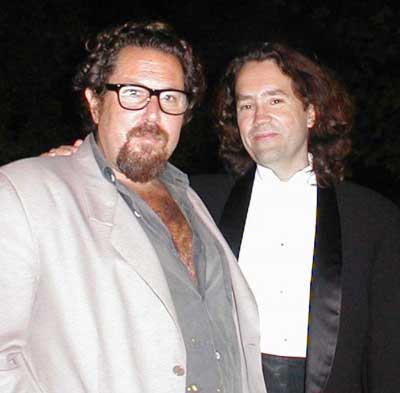 Julian Schnabel and Carter Burwell at the Venice Film Festival

Another thing I liked was the deep dive we all took into Cuban music. Because of the mix of African, Spanish and indigenous cultures, and because, like all islands, Cuba has steeped in its cultural juices for some time, it's unfathomably rich. In very few cases (e.g. "Trees Have A Life") I used aspects of Cuban music in the score, but mostly I avoided that appopriation. My score spends much of its time playing the poetry rather than the place or time of the story. It plays the artistic struggle of poet Reynaldo Arenas rather than the physical one.

The soundtrack album of Before Night Falls contains 2 pieces of score over which Javier Bardem delivers beautiful readings of Reynaldo Arenas's poetry. Here are samples of the score alone: 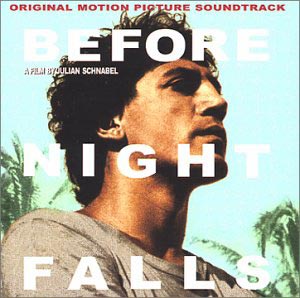 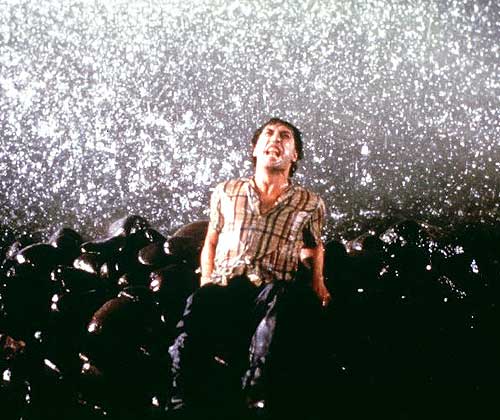 "Ironically for a film about a poet, it's the scenes without words, or rather the scenes where excerpts from Arenas' wonderful poetry and prose are read by Bardem in the original Spanish over magical images and Carter Burwell's hypnotic music that are the most successful." - Kenneth Turan, Los Angeles Times, Dec. 22, 2000.